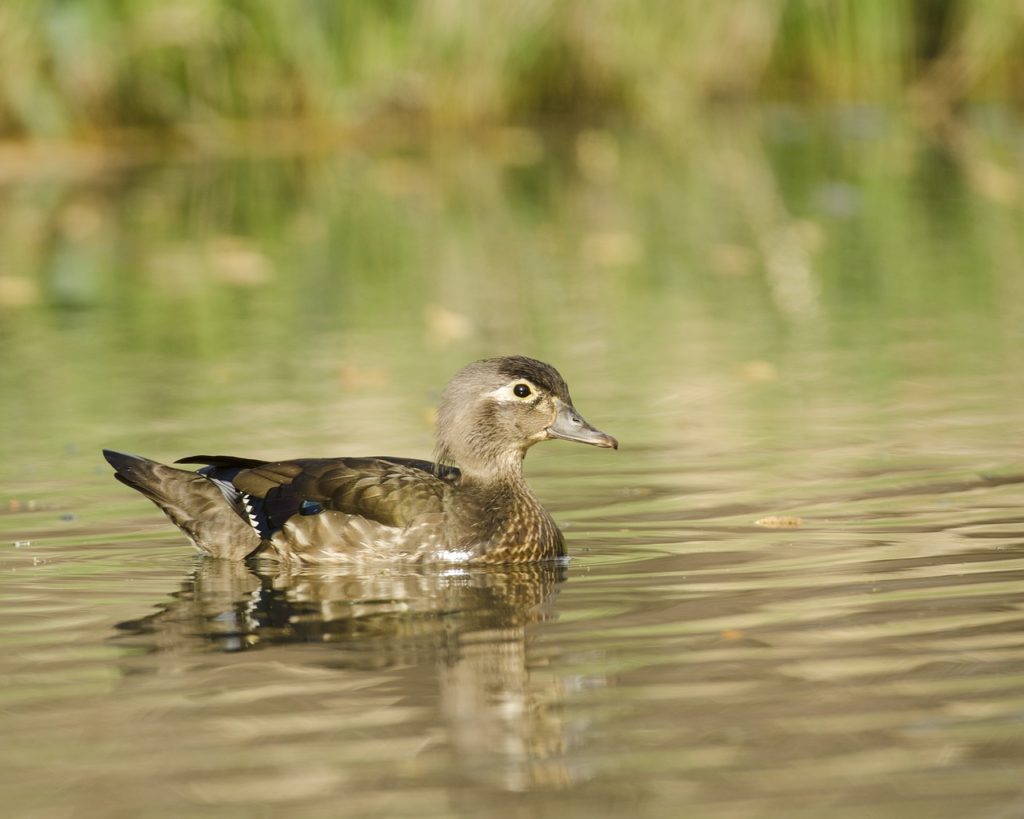 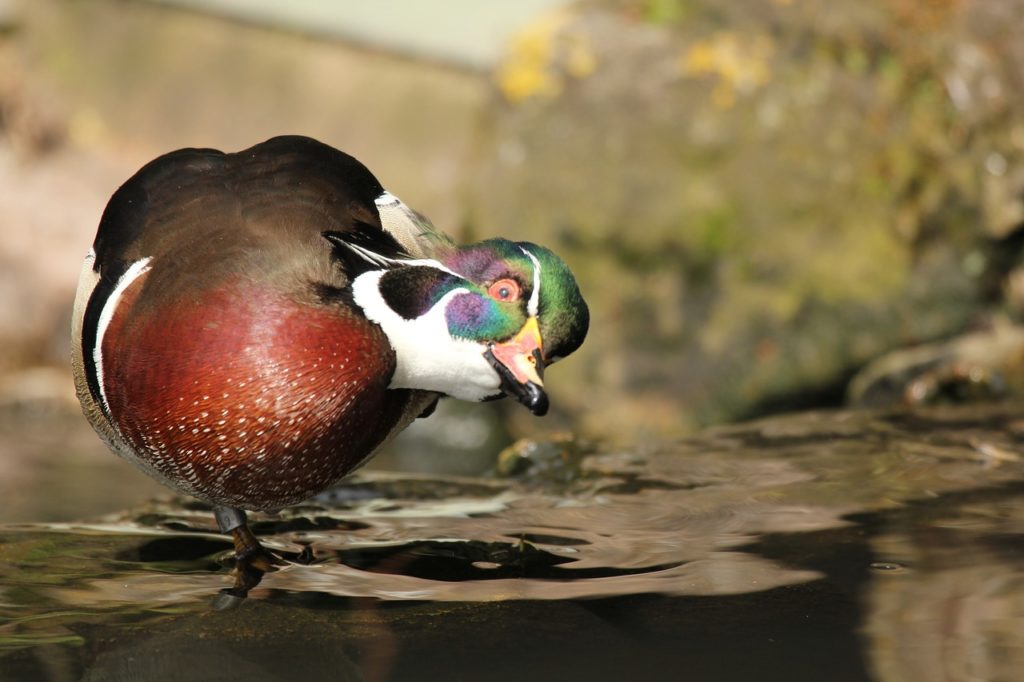 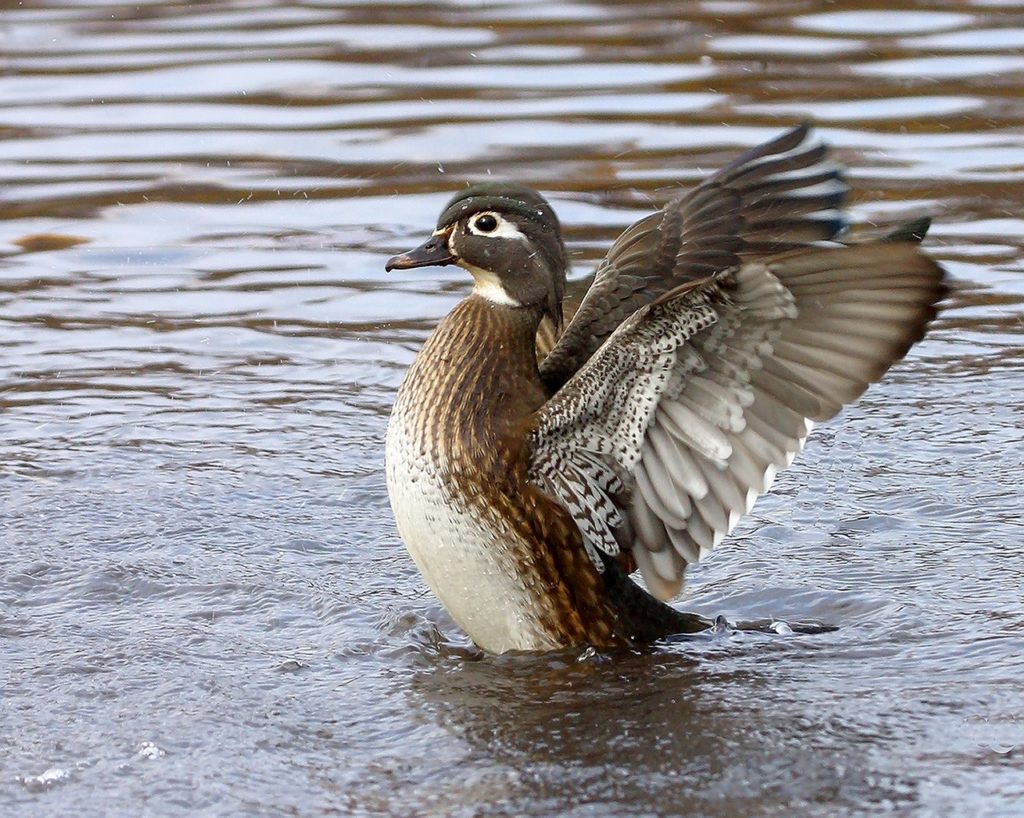 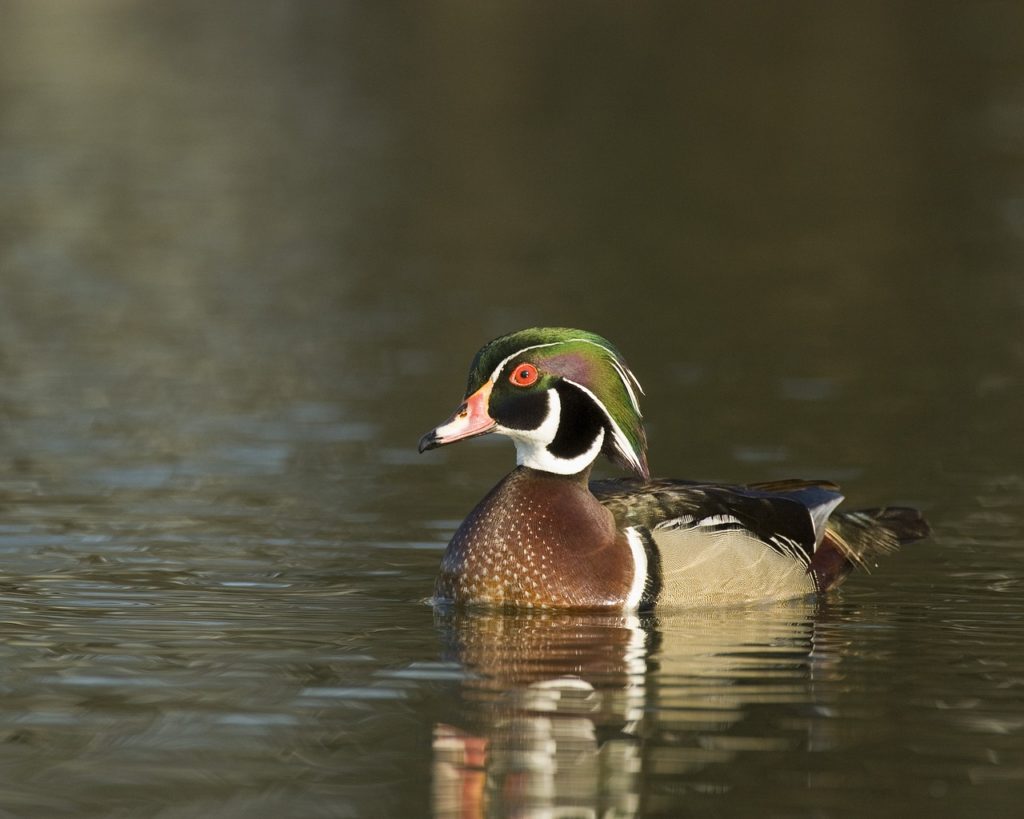 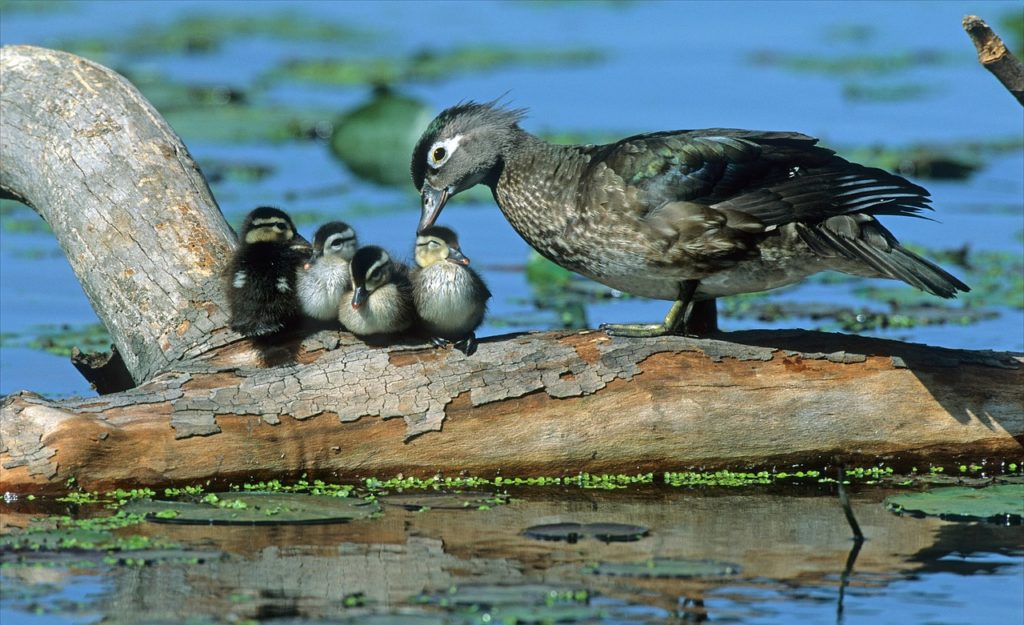 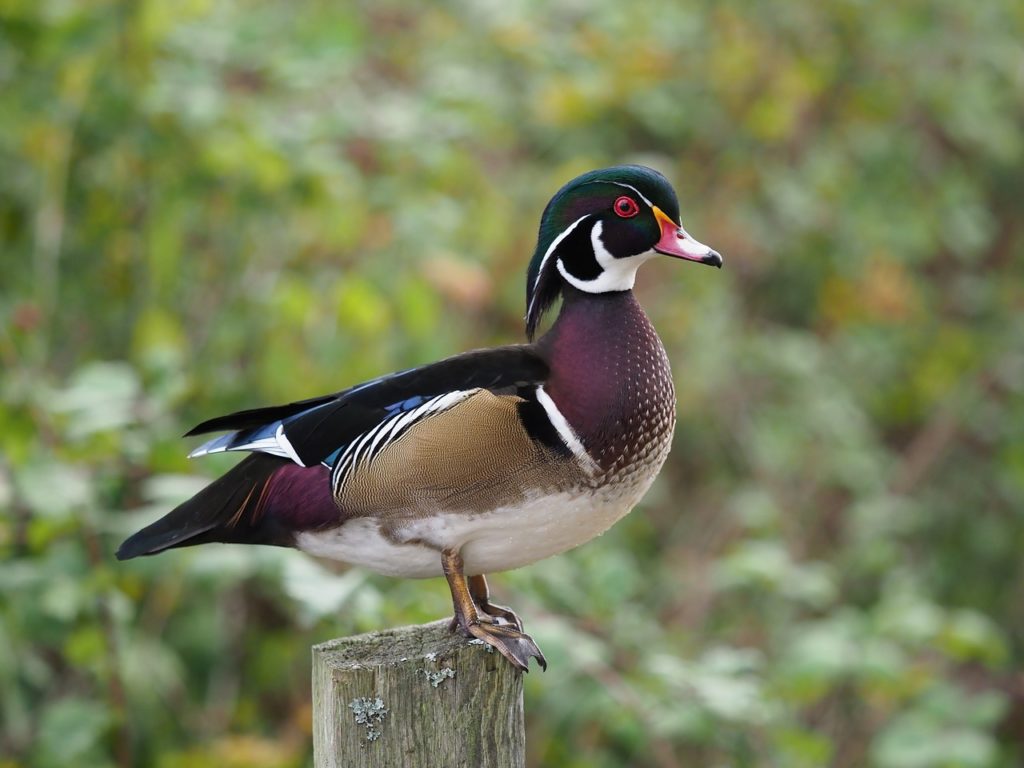 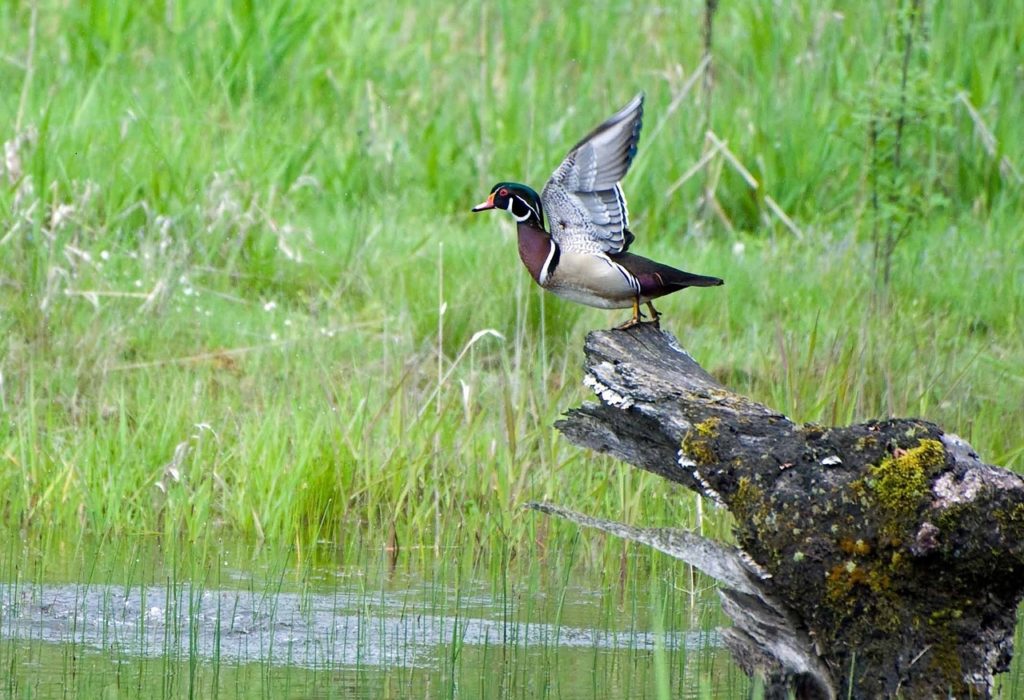 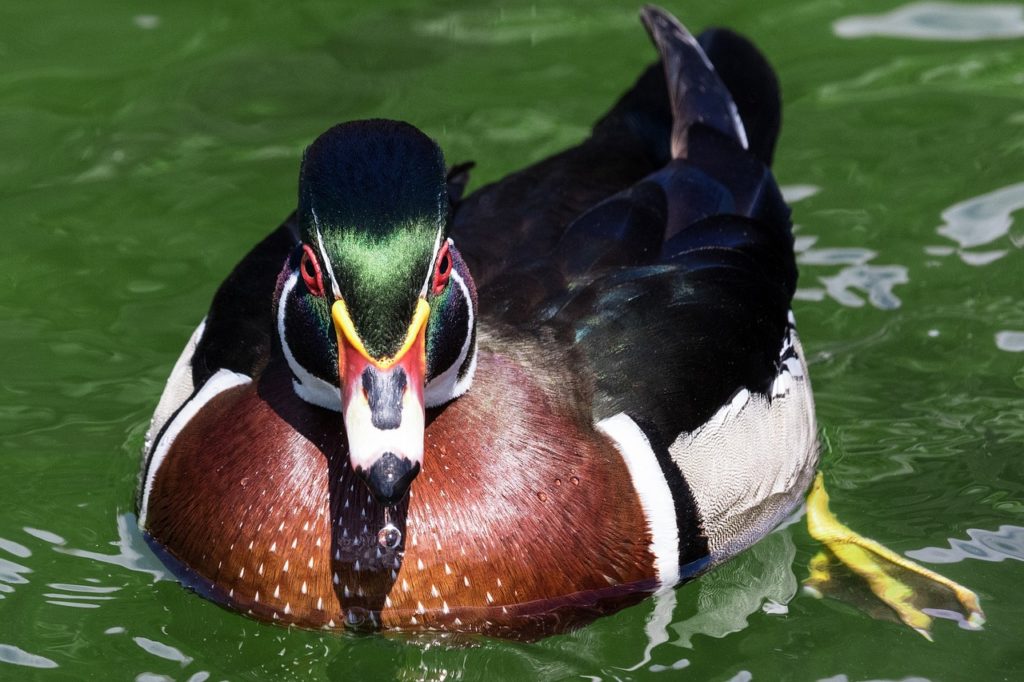 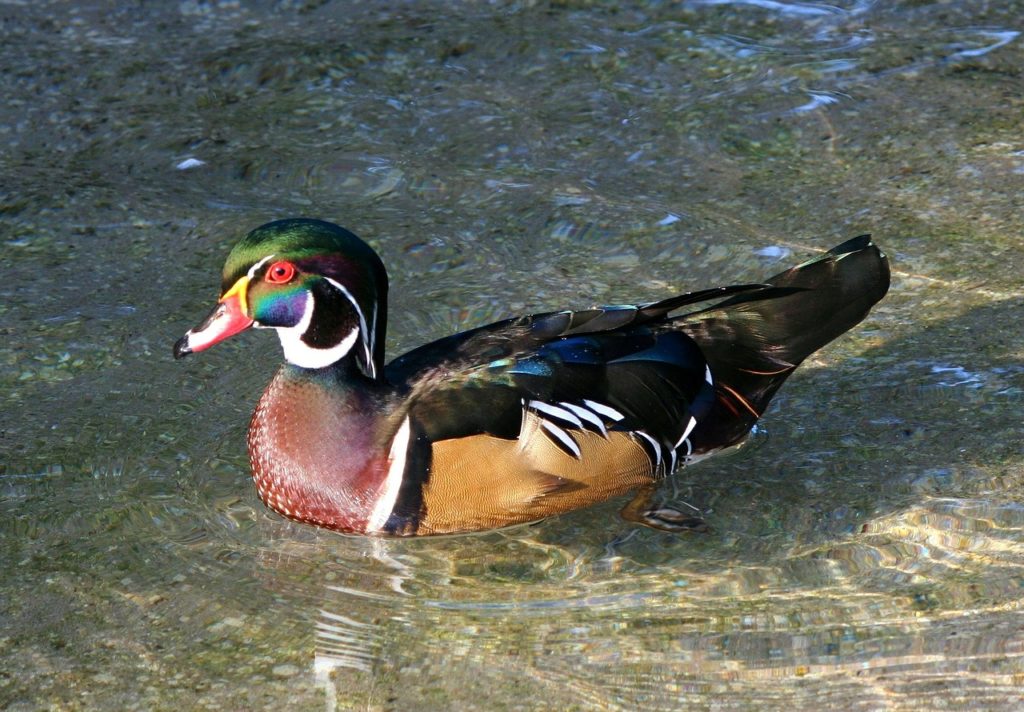 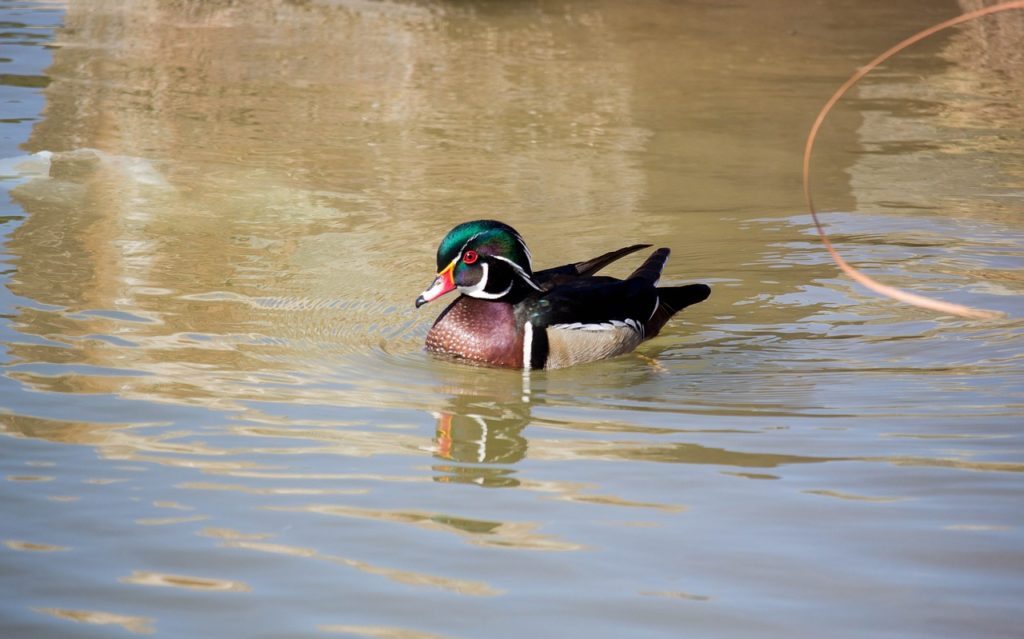 Range: Wood ducks are found on both coasts of the United States and across the southern portion of the country. They migrate from cooler areas, but in many parts of the south, they live year round.

Habitat: Wood ducks prefer swampy, wet areas with trees. They spend a great deal of time on the water, and that is where they obtain most of their food, but they nest in cavities of trees.

Wood ducks are "perching" ducks because their feet are adapted for perching on branches and they are able to walk well on land. They are also called "dabblers" because they generally make shallow dives with their heads and keep their tails above water. Hence, a habitat that allows them to both perch and dabble is preferable.

During the summer the male more closely resembles the not-so-flashy female, whose plumage is more brown with white markings and a white eye-ring.

The Wood duck is a small to medium-sized duck, with feet set forward on the body, allowing them to walk on land easily. They also have small claws on their feet that allow for climbing and perching.

Status in the wild: The International Union for the Conservation of Nature lists the Wood duck as being of Least Concern. Populations are healthy throughout its natural habitat and the bird is popular among those who collect water fowl.

In fact, wild populations of Wood ducks are healthy enough that they are hunted throughout North America during certain seasons.

Status in aviculture: Wood ducks are very common in aviaries around the world.

Breeding and Incubation: Wood ducks are able to breed their first spring and will typically lay one clutch per year, with 6-16 eggs in it. Incubation time is 28-30 days. Wood ducks require a raised box for nesting.

Miscellaneous Notes: Wood ducks will readily use nesting boxes when placed near water. They are popular among those who raise water fowl because of the beauty and striking appearance of the male during breeding season.

The Wood duck and the Mandarin duck are the only two members of the genus Aix and are quite closely related. Despite their similarities the two will rarely interbreed, even when kept in captivity together.