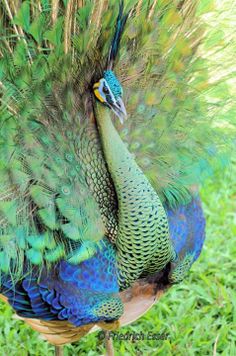 Java Green Peafowl are beautiful, and like all peafowl, they discourage bugs and snakes. With their royal bearing and beautiful tail feathers, peafowl are like living art.

Java Green Peacocks and peahens have a similar appearance. Both have an iridescent green head and body and a tall crest, as well as light blue and bright yellow coloring on their faces. The upper tail coverts, which cover the actual tail feathers, are very long on the males, and extend up to six feet during mating season. At other times of the year, the male's train remains molted and lowered and it can be difficult to distinguish the sexes. The female does however lack the brilliant gloss and sheen that the male has but she does have the scaled feathers and a long tail.

Range: Java Green Peafowl are the closest relative to the more widely recognized India Blue Peacock. Their natural habitat once covered a large portion of southeast Asia and included northern India, southern China, the islands of Java, Thailand, and Vietnam.

Status in the Wild: Due to loss of habitat, Java Green Peafowl are considered vulnerable to endangered.

Status in Aviculture: Java Green Peafowl are popular in aviaries and zoos and with breeders due to their size and coloration. They are fairly common in captivity but the purity of captive birds is not known..

Breeding and Incubation: Breeding season lasts from April to June, and the average clutch size of a Java Green Peahen is 4-6 eggs. The eggs are incubated for 26-28 days.

Lifespan: The average lifespan for peafowl is about 20 years.

Mature Weight: Java Green Peafowl are among the largest of all peafowl, and although males and females are similar in appearance, they are vastly different in size. Adult males weigh between 8.5 and 11 pounds; females weigh between 2.2 and 2.6 pounds.

Java Green Peafowl need large enclosures, for several reasons: The length of peacocks' tails. A bird with a five foot long tail needs room to move! They love to run. Running requires space. Peacocks can and will fly. Even with a clipped wing, these birds may surprise you. So, a top net is highly recommended. A tall roost or perch is necessary (again, to accommodate that tail).

Besides a large, carefully enclosed area, peafowl need to be dry. Java Green Peafowl are more sensitive to cold temperatures than other varieties. These birds can freeze and will need to be provided artificial heat source.

Miscellaneous: While not quite as hardy as India Blue Peafowl, Java Green Peafowl are relatively easy to raise and keep. Experts question the purity of many Java Greens bred in captivity due to hybridization.