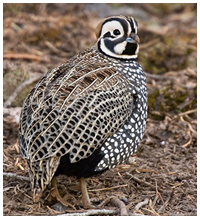 These are adult pairs.

Mearns Quail are beautiful, with interesting coloration, and a shorter, plumper build that most other varieties of quail.

Males are more brightly colored than females, and have particularly interesting face markings of black and white, sometimes described as "harlequin" or "swirling." They have a crest with a single plume, large heads, and big eyes. Their sides are brown with bright white spots, and their backs are brown with white darts. The chest and underparts are a beautiful mahogany color. Females are a light brown with darker brown, buff, and black markings.

Range: The Mearns Quail can be found in the deserts and mountains of northern Mexico, south and central Arizona, New Mexico, and west Texas.

Habitat: Oak and pine forests with grasslands are the only areas where these quail can be found in the wild. Slopes, canyons and hills abound in the natural habitat of Mearns Quail. They prefer areas with grass at least one foot high. In part due to cattle grazing, their natural, wild habitat is becoming increasingly smaller and fragmented.

Status in Aviculture: Mearns Quail are highly desired; however, they are also difficult to raise in captivity and are not recommended for beginners.

Breeding and Incubation: The breeding habits of Mearns Quail in the wild are unusual compared to other types of quail. Pairing usually occurs from February to March, but nesting doesn't take place until June, and lasts through August. Parents share incubation of the eggs.

One frequently cited problem with breeding in captivity is the humidity levels in the incubators. Successful hatching depends on lower-than-usual humidity.

Lifespan: Most Mearns Quail do not live through their first year in the wild. Of those that do, wild birds may live to four years of age, while some in captivity have reached seven years.

Diet: In captivity, chicks must be fed with tweezers until they understand how to eat and what food is. Most breeders recommend mealworms during this period. In the wild, adult Mearns Quail eat tubers and grasses native to their territory. Abundant and diverse grass cover assures a proper diet.

Miscellaneous: Mearns Quail are known by many other names including Montezuma, Harlequin (which is confusing because there is a separate species called African Harlequin), Desert, Black, and Censorial, Fools, and Painted, among others. Generally speaking, the Mearns Quail form smaller coveys than other species. Mearns Quail are hunted in Arizona.