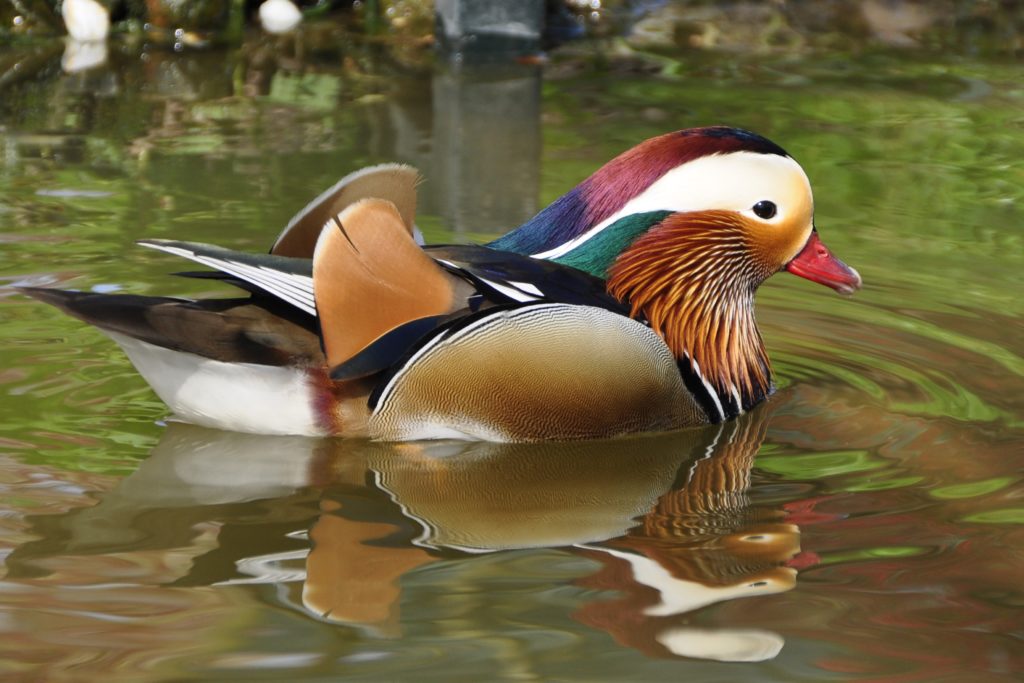 Range: At one time, Mandarin ducks lived all over eastern Asia, but are disappearing rapidly. There are likely fewer than 1,000 pairs in China but there may be as many as 5,000 pairs in Japan.

A long time favorite of water fowl enthusiasts throughout the world, Mandarins are being raised in captivity all over the globe. In some places, notably Great Britain, Mandarins that have escaped from private collections have established wild populations. In fact there may be as many as 1,000 pairs living in the wild in Great Britain.

Habitat: Mandarins live in woody areas near water. They are well-adapted for forest dwelling. Their feet are set more forward on their bodies, making walking on land and perching on trees easier. In fact, Mandarins are one of a group of ducks known as "perching ducks."

They eat by making shallow dives and so are also known as "dabblers." While they can dive as many as four feet deep, they prefer to dip just their heads under the water and graze on the insects and plant life just under the surface.

Although they spend a great deal of time in the water, Mandarins nest in the trees. Unfortunately, forests near wetlands are disappearing at a rapid rate and so the wild, native population is dwindling at an alarming pace.

Mandarins do well in captivity, as long as they are kept in covered aviaries or pinioned. They fly well, and have been known to travel as far as 500 miles in a 24 hour period. Although the wild population is suffering, there is a healthy captive population.

Description: Female Mandarins are a dull brown, and so are males during most of the summer. When breeding season approaches, though, the males grow beautiful, colorful plumage, and have distinctive "sail" feathers that stand along their backs. With a dark red breast, irridescent blue-green underwings and tail and royal-looking crest, the male Mandarin is eye-catching to say the least.

Status in the wild: The International Union for the Conservation of Nature lists the Mandarin Duck in the category Least Concern. Wild populations are diminishing due to widespread distribution and loss of habitat.

Status in aviculture: Healthy captive populations across the globe.

Miscellaneous Notes: Mandarins enjoy a long history in Asia, and are a symbol of a happy marriage in the Chinese tradition of feng shui. Mandarins mate for life and both parents provide some care for the young. Somewhat like the swan, Mandarins have inspired generations of artists, poets and storytellers.