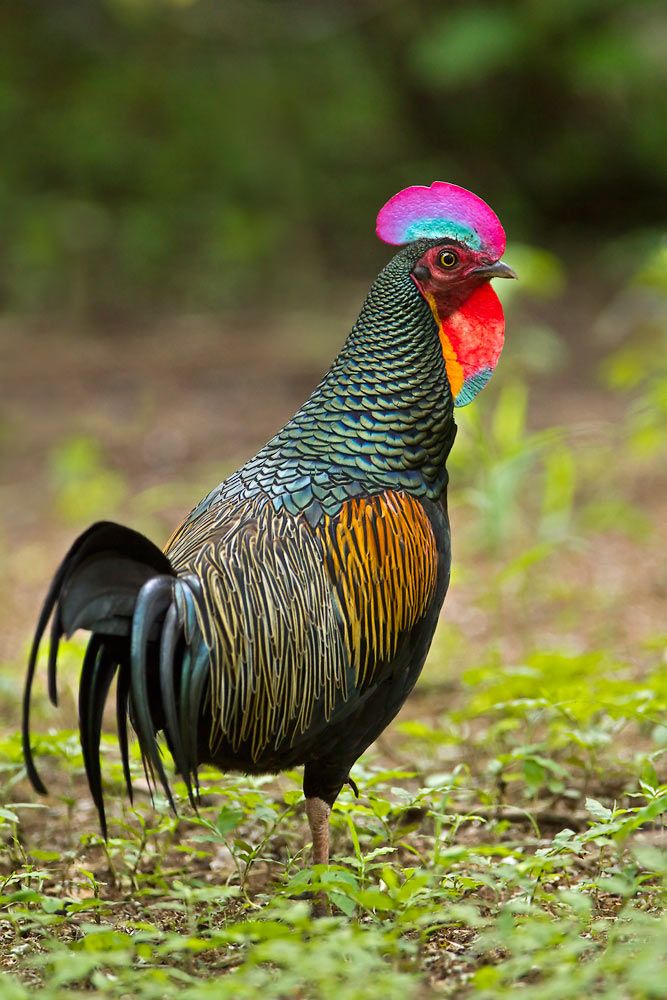 The green jungle fowl (Gallus varius), also know as Javan junglefowl, forktail or green Javanese junglefowl, is a medium-size (up to 75 cm long) bird in the pheasant family Phasiandidae.

The colouration of the green junglefowl is sexually dimorphic. The males's plumage is dark and blackish at a distance. A closer view reveals an iridescent mantle of gleaming scales reminiscent in colour and pattern to those seen in the ocellated turkey and green peafowl. Each scale is vivid blue and its base and moves through various shades of gold and bronzed green. Specialized plumes framing the throat of the male green junglefowl are highly light-reflective and appear violet at the proximal and sky blue at the distal edges. The Lesser coverts of the wings are a striking burnt orange with bronzed black centers. The distal edges of the greater secondary coverts are vivid ocher.

Like the related red junglefowl, the breast and ventral regions are a dense, light-absorbing black. Like its closer relative the Sri Lankan junglefowl, the male green junglefowl exhibits vivid 'windows' of bare facial skin that contrast against the dark scarlet red of the face. The green junglefowl exhibits an ice blue center in its comb. A region of electric yellow facial skin extends below each ear, delineating the plumed hackles from gular lappet. Its head is topped by a light blue comb, which turns purple or red towards the top. Its wattle is also of the same colour but is bordered with blue on the edges and yellow closer to the throat. The female is mostly brown with occasional green feathers and has no comb.

Behavior-The green junglefowl usually lives in groups of two to five in the wild led by a dominant male, who takes the flock to feed and drink and then back into the cover of the forest. In the night the flock roosts in bamboo stands at 15–20 feet above the forest floor. In the breeding season the dominant males in each flock are challenged by other males without flocks. The two males clap their wings and crow loudly while fighting each other with their spurs.

The green junglefowl is being maintained and increasingly bred in captivity as its genetic diversity is disappearing. This is because these birds are bred with domestic chickens by many people, producing a hybrid known as the bekisar. The bekisar has become very popular in the East Java province and has become a mascot of the area.

The captive green junglefowl requires warm aviaries with lots of foliage and cover due to their shy nature and are fed with grains and seeds, as well as fruit and insects as these are the same type of food they would feed on in the wild. This bird has also been known for a long time as a pet animal because of its beauty and unique call.