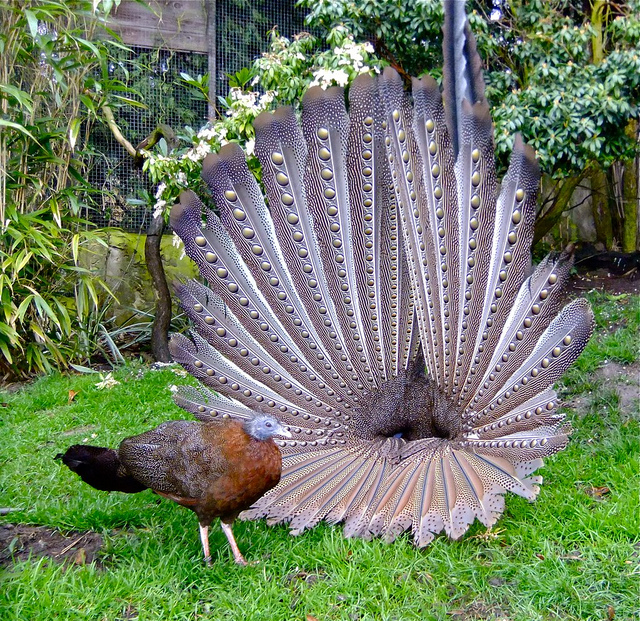 Malay Great Argus Pheasants or Argusianus argus are one of the most remarkable species of birds in the world. Among pheasants, the male Great Argus is not the most colorful, but structurally, and especially when he is displaying during breeding season, he is spectacular.

The Malay Great Argus Pheasant is colored in browns and fawn. He has a blue, rather bald head and neck, with black hair-like feathers on the crown and nape. The breast is a reddish chestnut color, and legs are reddish-pink in color. Describing this rather plain coloring, is deceptive though. The male Great Argus is a huge pheasant, measuring over 6 feet in length. The tail can make up 4.5 feet of that length. Tail feathers are thick and snake-like. The most striking feature are the secondary feathers of the wings, which are gigantic, both broad and extra long, and geometrically decorated with shimmering lines, purple-blue coloring, and hundreds of ocelli or eyes.

The male dances about with wings extended like two gigantic fans in front of his head and tail erected behind. During this process, he makes loud 'Kow Wow' calls to his mate, a female which is similar in coloring to him, but redder and smaller. She has quite an array of patterned and elongated feathers herself, but not nearly as dramatic as the male's.

The Malay Great Argus Pheasant is a rare bird and is for the serious avian collector.

Range: The Great Argus Pheasant is native to the jungles of southeastern Asia, specifically the Malay Peninsula as well as the Indonesian Islands of Borneo and Sumatra.

Habitat: Great Argus Pheasants seem to have a preference for primary forest areas. They are much less commonly found in old or in young, secondary forests. These birds are usually seen foraging on the jungle floor at dawn and dusk.

Status in the Wild: Near Threatened by IUCN.

Status in Aviculture: These large birds are uncommon in captivity, especially in the Western Hemisphere. Great Argus Pheasants are not difficult to raise in captivity though. They are calm and gentle birds and can be quite tame and social with humans.

Breeding and Incubation: Great Argus hens are good mothers. Hens can lay up to three clutches of 2 eggs per clutch each breeding season if the eggs are taken away. It is a good practice though to let her incubate and raise her own clutch or at least her second clutch. Encouraging her to lay three in one year can lead to health issues and to lack of any eggs the following year. Eggs are incubated for 25 days. Great Argus chicks are hardy and grow fast. They are usually friendly and inquisitive. It takes three years for the male to attain full plumage, and the wing feathers can continue growing until the birds is six years old.

Lifespan: The lifespan of the Great Argus Pheasant in the wild is unknown, but zoos have reported the species living up to 20 years of age.

Housing Requirements: Great Argus Pheasants are large and require a spacious aviary. In cool climates, these tropical birds will need indoor, heated shelter during the winter.

Diet: Great Argus Pheasants should be fed a high-quality game bird feed, but they also require variation to the diet. Greens, mealworms, crickets, and fruits and vegetables should also be provided for healthy birds.

Miscellaneous Notes: The Great Argus Pheasant was named by Carolus Linnaeus. The name, Argus refers to a character from Greek mythology, who was a giant with a hundred eyes.