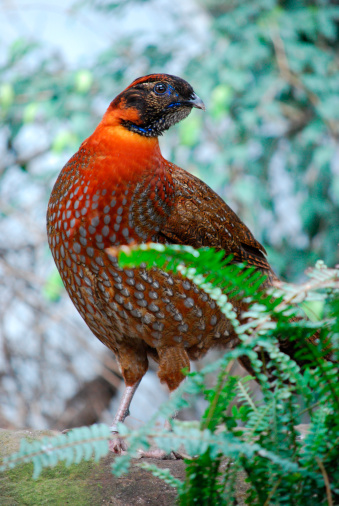 Range: Temminck's Tragopans have a large distribution area, compared to other members of the species. They are in northern India, Vietnam, Myanmar, and southern China.

Habitat: Dense forests, with lots of cover such as bamboo or rhododendron. They sometimes migrate up and down the mountains of Himalayas - moving lower when it is colder, and higher during warmer weather.

Description: The male Temminck's Tragopan is one of the most beautiful birds in the world. His coloring is dominated by orange and crimson. He has exposed, blue facial skin that is surrounded by a "mask" of black feathers. He also has ocelli, or "eyes" similar to those on a peacock on his back and breast. His tail and beak are both short, and his legs are pink.

The male Temminck's Tragopan also has a lappet, or bib, that is usually tucked away and not immediately apparent. When he unfurls his impressively colored bib, he is a sight to behold. The lappet is marked with bright blue, crimson, and white, and is so large to hide the rest of the bird's body behind it, like a curtain.

The frontal courtship display is fairly rare, so there are many more images of the male Temminck's Tragopan in is usual state.

The female is much drabber in color, with grey and brown dappling all over.

Status in the wild: Populations of Temminck's Tragopan are thought to be healthy, with over 100,000 birds living in the wild, but there is concern because their habitat is disappearing. They are quite shy birds and hide in dense cover.

Status in aviculture: Temminck's are the most popular tragopan to raise in captivity and there are healthy numbers living in zoos and aviaries around the world. They do prefer large pens with plenty of shrubbery and trees for roosting.

Miscellaneous Notes: Temminck's Tragopan was named after a Dutch zoologist, Coenraad Jacob Temminck, as were many other animals, including a type of catfish, a turtle, and many birds.