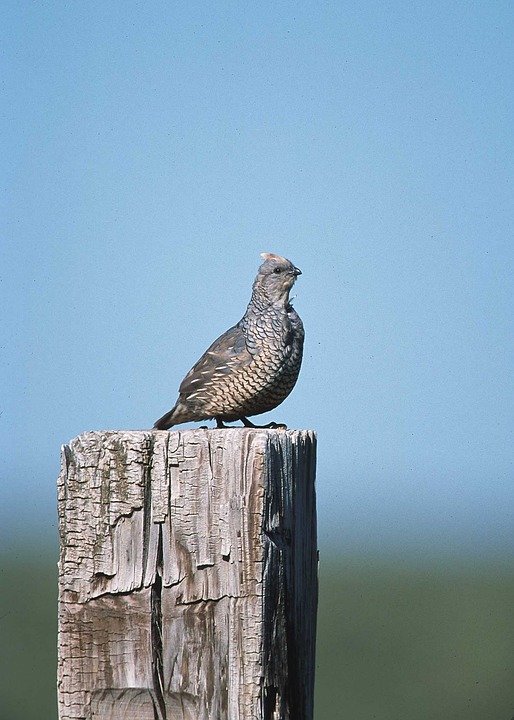 The Blue Scale Quail, Callipepla squamata, is a beautiful and unique species of quail. They are often called "Cotton Tops" because of the plumage on the top of their head. Scale Quail are popular as game birds.

The mature Blue Scale Quail is about 10 to 12 inches long. They have a grey-brown head with a white "cotton top" crest, black bill, and beautiful blue feathers with black lacing, resembling scales, from the neck down to the breast and back. The wings and lower back to their tail feathers are a grey-brown color. It is very difficult to distinguish the male from the female. Upon close inspection, the best determination is their throat color--the male's throat is ash-gray while the females throat is a light yellow.

Scale quail prefer to run rather than fly and in fact can run faster than 15 miles per hour! Through the winter, these quail live in coveys or groups of about 30 birds, though much higher numbers are not out of the question. They roost in circles facing outwards to keep a watchful eye out for predators. The Blue Scale Quail is cold hardy when kept in coveys.

Range: Scale quail are native to the southwestern part of the United States--New Mexico, Arizona, Colorado, Kansas, Oklahoma and Texas. They have been established in Washington and Nevada as well. They are also native to Central Mexico. They do best around an elevation of 3500-4600 feet, but not more than 5,800 feet above sea level.

Status in the wild: Blue Scale Quail are classified as Least Concern.

Status in Aviculture: Blue Scale Quail are common in aviculture.

Breeding and Incubation: Breeding season for the Blue Scale Quail is in the spring, typically April thru September. They will separate from the covey and form breeding pairs. The hen will lay a clutch of 12 to 14 eggs on average in a ground depression lined with grasses and other vegetation. Eggs are a light cream with pale brown flecks and hatch in 21 to 23 days. More than one clutch in a season is common. Chicks are able to run and keep up with their parents from day one. Both parents typically help raise the young and show them how to find food. Adult size is reached within about 12 weeks and they are able to reproduce the following year.

Lifespan: Average lifespan of wild quail is 1.5 years, but in captivity, this is increased to five to seven years.

Housing Requirements: Blue Scale Quail do well in a large pen, raised on the ground if your conditions are dry, otherwise a wire floor is suitable. They prefer to roost. They have a lot of potential predators, so protection is of vital importance. Natural cover of grass and shrubs is recommended.

Diet: In the wild, Blue Scale Quail enjoy seeds, succulent fruits, grasses and other greens, and insects. Treat them with meal worms and fresh greens. Game bird crumble is appropriate in captivity.