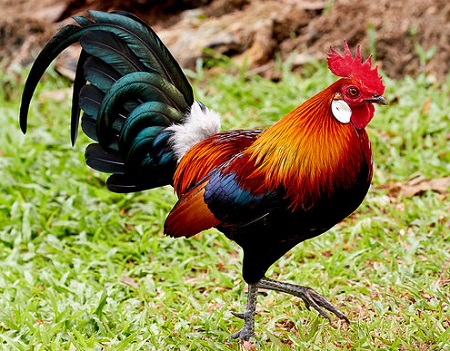 The red junglefowl (Gallus gallus) is a tropical member of the family Phasianidae. It is the primary progenitor of the domestic chicken (though genetic evidence strongly suggests some past hybridisation with the grey junglefowl as well). The red junglefowl was first domesticated least 5000 years ago in Asia. Since then, its domestic form has spread around the world and is kept globally as a very productive food source of both meat and eggs.

Range: The range of the wild form stretches from India, eastwards across Indochina and southern China and into Malaysia, Singapore, the Philippines, and Indonesia. Junglefowl were one of three main animals (along with the domesticated pigs and dogs) carried by early Austronesian people from island Southeast Asia in their voyages to the islands of Oceania in prehistory, starting at around 5,000 BP. Today their ancient descendants are found throughout Micronesia, Melanesia and Polynesia.

The male's tail is composed of long, arching feathers that initially look black, but shimmer with blue, purple, and green in bright light. The female's plumage is typical of this family of birds in being cryptic and adapted for camouflage. She alone looks after the eggs and chicks. She also has no fleshy wattles, and a very small comb on the head.

During their mating season, the male birds announce their presence with the well known "cock-a-doodle-doo" call or crowing. Male red junglefowl have a shorter crowing sound than domestic roosters; the call cuts off abruptly at the end. This serves both to attract potential mates and to make other male birds in the area aware of the risk of fighting a breeding competitor. A spur on the lower leg just behind and above the foot serves in such fighting. Their call structure is complex and they have distinctive alarm calls for aerial and ground predators to which others react appropriately.

Males make a food-related display called "tidbitting", performed upon finding food in the presence of a female. The display is composed of coaxing, cluck-like calls, and eye-catching bobbing and twitching motions of the head and neck. During the performance, the male repeatedly picks up and drops the food item with his beak. The display usually ends when the hen takes the food item either from the ground or directly from the male's beak. Breeding then occurs. Males that produce antipredator alarm calls appear to be preferred by females.

They are omnivorous and feed on insects, seeds, and fruits, including those that are cultivated such as those of the oil palm.

Red junglefowl regularly bathe in dust to keep just the right balance in their plumage. The dust absorbs extra oil and subsequently falls off.

Flight in these birds is almost purely confined to reaching their roosting areas at sunset in trees or any other high and relatively safe places free from ground predators, and for escape from immediate danger through the day.

Violent sexual coercion has been observed in red junglefowl.

Domestication: In 2012, a study examined mitochondrial DNA recovered from ancient bones from Europe, Thailand, the Pacific, and Chile, and from Spanish colonial sites in Florida and the Dominican Republic, in directly dated samples originating in Europe at 1,000 BP and in the Pacific at 3,000 BP. The study showed that chickens were most likely domesticated from wild red junglefowl, though some have suggested possible genetic contributions from other junglefowl species. Domestication occurred at least 7,400 years ago from a common ancestor flock in the bird's natural range, then proceeded in waves both east and west. The earliest undisputed domestic chicken remains are bones associated with a date around 7,400 BP from the Chishan site, in the Hebei province of China. In the Ganges region of India, red junglefowl were being used by humans as early as 7,000 years ago. No domestic chicken remains older than 4,000 years have been identified in the Indus Valley, and the antiquity of chickens recovered from excavations at Mohenjodaro is still debated.

Purebred red junglefowl are thought to be facing a serious threat of extinction due to hybridisation at the edge of forests, where domesticated free-ranging chickens are common