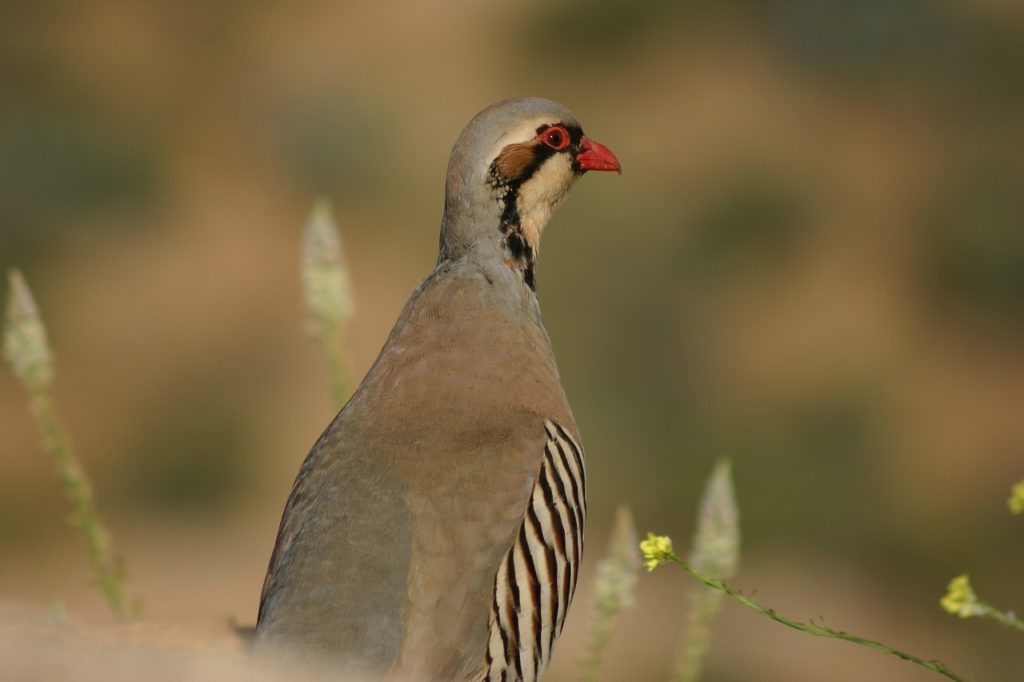 The Chukar Partridge is a wonderful sporting bird. Their flashy coloring combined with their high quality and flavorful meat makes them a favorite of avian collectors as well as hunters and dog trainers.

Description: The Chukar Partridge is a handsome bird. They are mostly a beautiful blue-gray and sandy color, but with eye-catching black and white stripes on their flanks with golden or coppery highlights. They have a black stripe framing the lower part of the face and extending around the light-colored throat. A bright red bill, eye rings, and legs add final accents to the dramatic look. Males and females are very similar in coloring, with males being a bit larger and sporting a small spur on their legs.

Range: The natural range of wild Chukar Partridges is Eastern Europe and Western Asia, but they have been naturalized throughout the world.

Habitat: Chukar Partridge are naturally birds of arid, desolate, rocky regions. The breed has done very well in the Rocky Mountains of Western North America, where they were released in 1932. They are great companion birds for the overgrazed areas of the West and also do well in open woodlands and overgrown meadows.

Status in the Wild: Chukars are resilient and adaptable birds and the population worldwide is considered stable and unthreatened. In North America, they are plentiful and well established in areas where they have naturalized. There are currently over 13 subspecies of Chukar Partridge worldwide.

Status in Aviculture: Chukar Partridges are popular birds in aviculture, being one of the easiest of the upland game birds to raise.

Breeding: Chukar Partridges are monogamous. Males can be pugnacious, and you may have to separate males during the breeding season. However, if you raise males together from early-on, they will establish a social hierarchy allowing for a colony or covey environment. Eggs are laid in early spring through late summer, and number about 40 eggs per year.

Incubation: Chukar Partridges do not tend to go broody in captivity. An incubator or broody hen is a very common husbandry practice. Incubation takes about 23 days.

Lifespan: Hardy and disease resistant, Chukar Partridges have been known to live up to 10 years in captivity.

Size: Chukar Partridge are 14 inches long and weigh between 16-29 ounces.

Housing Requirements: The Chukar Partridge is a bird of arid and dry regions, and as such, they do not do well in wet and damp environments. It is very important to keep their housing well-drained and litter dry and clean. Like most game birds, avoiding overcrowding and providing some brush, logs, and hiding places for your Chukar Partridges will prevent a lot of possible issues with bullying and pecking. There should be plenty of space per bird, ideally 64 square feet per pair. These birds are very hardy and tough, but should have some dry, sheltered spot for roosting at night. They usually do not seek out a coop-like structure and prefer natural looking shelters.

Diet: In the wild, Chukar Partridges feed on mostly seeds and vegetable matter, although young birds will eat insects. A typical game bird crumble feed is an adequate diet, with a higher protein content, about 26-30%, can be given to chicks until feathered. Greens and mealworms certainly add diversity to the diet and are great treats.

Miscellaneous Notes: Chukars are named after the sound they make, which is a series of loud 'chuck, chuck, chucks'.