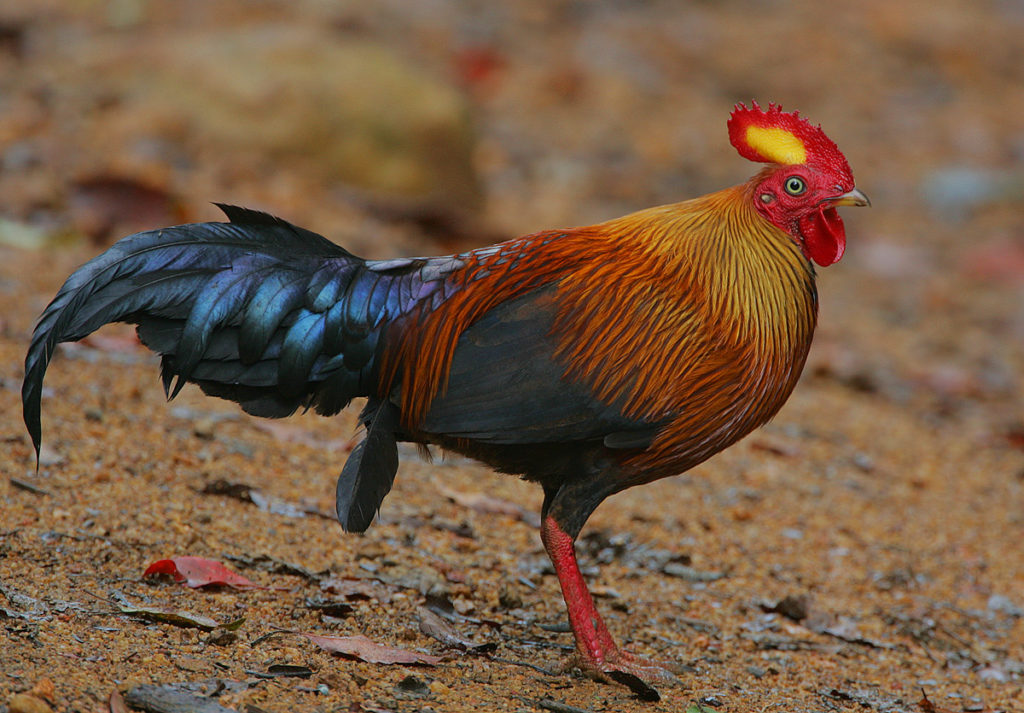 The Sri Lankan Junglefowl (Gallus lafayettii), also known as the Ceylon Junglefowl, is a member of the Galliformes bird order which is endemic to Sri Lanka, where it is the national bird. It is closely related to the red junglefowl (G. gallus), the wild junglefowl from which the chicken was domesticated. The specific name of the Sri Lankan junglefowl commemorates the French aristocrat Gilbert du Motier, Marquis de La Fayette.

As with other junglefowl, the Sri Lankan junglefowl is strongly sexually dimorphic; the male is much larger than the female, with more vivid plumage and a highly exaggerated wattle and comb.

The male Sri Lankan junglefowl ranges from 66–72 cm (26–28 in) in length and 790–1,140 g (1.74–2.51 lb) in weight, essentially resembling a large, muscular rooster The male has orange-red body plumage, and dark purple to black wings and tail. The feathers of the mane descending from head to base of spine are golden, and the face has bare red skin and wattles. The comb is red with a yellow centre. As with the green junglefowl, the cock does not possess an eclipse plumage.

This is one of four species of birds in the genus Gallus.

As with other jungle fowl, Sri Lankan jungle fowl are primarily terrestrial. They spend most of their time foraging for food by scratching the ground for various seeds, fallen fruit, and insects.

Females lay two to four eggs in a nest, either on the forest floor in steep hill country or in the abandoned nests of other birds and squirrels. Like the grey and green junglefowl, male Sri Lankan junglefowl play an active role in nest protection and chick rearing.

The reproductive strategy of this species is best described as facultative polyandry, in that a single female is typically linked with two or three males that form a pride of sorts. These males are likely to be siblings. The female pairs with the alpha male of the pride and nests high off the ground.

Her eggs are highly variable in colour, but generally are cream with a yellow or pink tint. Purple or brownish spots are common.

The hen incubates her eggs, while the alpha male guards her nest from a nearby perch during the nesting season. The beta males remain in close proximity, and guard the nesting territory from intruders or potential predators, such as rival males, or snakes and mongooses. Sri Lankan junglefowl are unique amongst the junglefowl in the brevity of their incubation, which may be as short as 20 days as contrasted with the 21–26 days of the green junglefowl.

The chicks require a constant diet of live food, usually insects and isopods such as sowbugs and pillbugs. In particular, the juveniles of land crabs are also highly important to the growth and survivability of the juvenile and subadult Sri Lankan junglefowl. In captivity, this species is particularly vulnerable to a poultry disease caused by the bacteria Solmonella pullorum and other bacterial diseases common in domestic poultry. The chicks, and to a slightly lesser extent the adults, are incapable of using vegetable-based proteins and fats.Their dietary requirements cannot be met with commercial processed food materials. As a result, they are exceedingly rare in captivity.

It is common in forests and scrub habitats, and is commonly spotted at sites such as Kitulgala, Yala and Sinharaia.