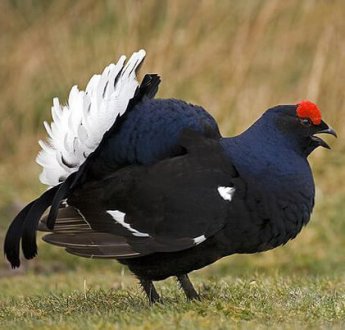 The Black Grouse is a beautiful and rare species of gamebird. Males are often called Blackcocks, and the females are called Greyhens. Females tend to be 16 inches long weighing as much as 2.4 pounds, while males can grow up to 21 inches long and weigh as much as 3.2 pounds. Males will have black feathers mixed with red and white colors on their wings and wattle. Males are known for their lyre-shaped tails. The bird is known for their dove-like call.

Range and Habitat: Black Grouse are mostly found in the northern moorlands and bogs of Eurasia. Interestingly, the bird is found in Great Britain, but not Ireland. They are found across Scandinavia, northern Eastern Europe, and across the Russian North. They do not migrate to reproduce or to find food, allowing them to be hunted all year round in the same areas.

Status in the Wild: Western Europe is seeing declines in the population of Black Grouse. Denmark went so far to say that the animal was extinct within its borders. Nevertheless, the Black Grouse population have been verified to be sustainable in Russia and pocket areas of Europe. The IUCN reports that the animal is of least concern.

Breeding and Incubation: Males begin courting the females in the spring. A distinctive mating call, also known as a lek, is made to females. Gatherings are made of the animals in the wild with some reports showing up to 40 to 150 birds participating in the mating ritual. The females will lay about 8 to 10 eggs. Eggs incubate for about 24 days.

Status in Aviculture: Grouse are not common in aviculture, though private breeders and organizations are helping increase population numbers.

Housing: A healthy living space should be 6 to 8 square feet per bird. Grouse do not handle stress and should be housed separately except for breeding season, at which time, you can have a pair or trio together as long as the females are tolerant of each other.

Diet: The Black Grouse primarily eats the roots of shrubs and sometimes berries from plants. Chicks also eat insects. Game bird feed is appropriate in captivity. Feeders for the Black Grouse should be one inch long for 1-2 week old chicks and then expanded to 2 and a half inches for 2-6 week old chicks.

Lifespan: In the wild, the Black Grouse has been reported to live for up to 5 years. Life expectancy is increased in captivity.

Miscellaneous Notes: Black Grouse tails are coveted in Scottish clothing, particularly for Highland Dress, caps, and the clothing of the Royal Regiment of Scotland.