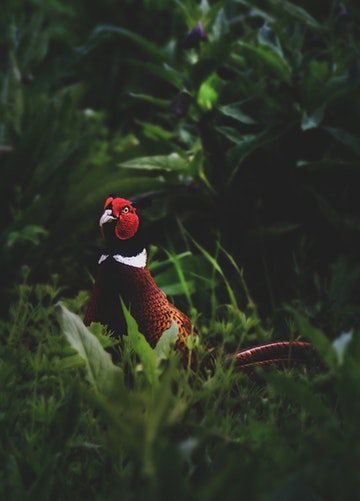 Ringnecks are the most common type of pheasant produced for gamebird hunting, raising for release, and also dog training.

Range: Originally, the Chinese Pheasant was found in Asia. Now, populations have been introduced all over the world.

Habitat: Because the native range of the Chinese Ringneck Pheasant encompasses the largest continent on Earth, and because these birds are found all over the world, they have adapted to thrive as captive birds for gamebird raising worldwide.

Description: Males are predominantly brown and golden in color, with some green, purple, white markings in some individuals. The crown of the head is green, there is an exposed ring of red skin around the eye, the wattle is distinctively red, and the back of the neck is blue. Males also have long tails, that average around 20 inches in length. Chinese Ringneck pheasant males weight aroun 2.6 pounds and females about 2.0 pounds.

Females are much less showy, being brown and golden all over, and being generally smaller.

Status in the wild: This species is considered "common to abundant" and is in no danger of disappearing.

Status in aviculture: While Chinese Ringneck Pheasants are commonly raised in captivity, for a variety of reasons, it is quite rare, particularly in the United States, to find purebred Ringnecks. Part of the reason for this is the appearance of females is so similar across the many subspecies many breeders have difficulty in telling them apart.

Pheasant is considered a delicacy and is featured in many fine dining establishments, so small farmers and flock keepers sometimes raise Chinese Ringnecks for food. For food production we actually have a Jumbo Ringneck Pheasant that would be better suited as it is much larger.

As the most hunted fowl in the world, many people raise Common Pheasants for release for hunting purposes. If that is the goal, experts recommend a large pen with plenty of room for flight, and as little contact as possible with the birds.

Miscellaneous Notes: The word pheasant is derived from the word Phasis, which was an ancient city.

Chinese Ringneck Pheasants will breed during their first year.

The Common Pheasant is the state bird in South Dakota.

Chinese Ringnecks were introduced in the United States in 1881, and wild populations were quickly established in the Rocky Mountain region.