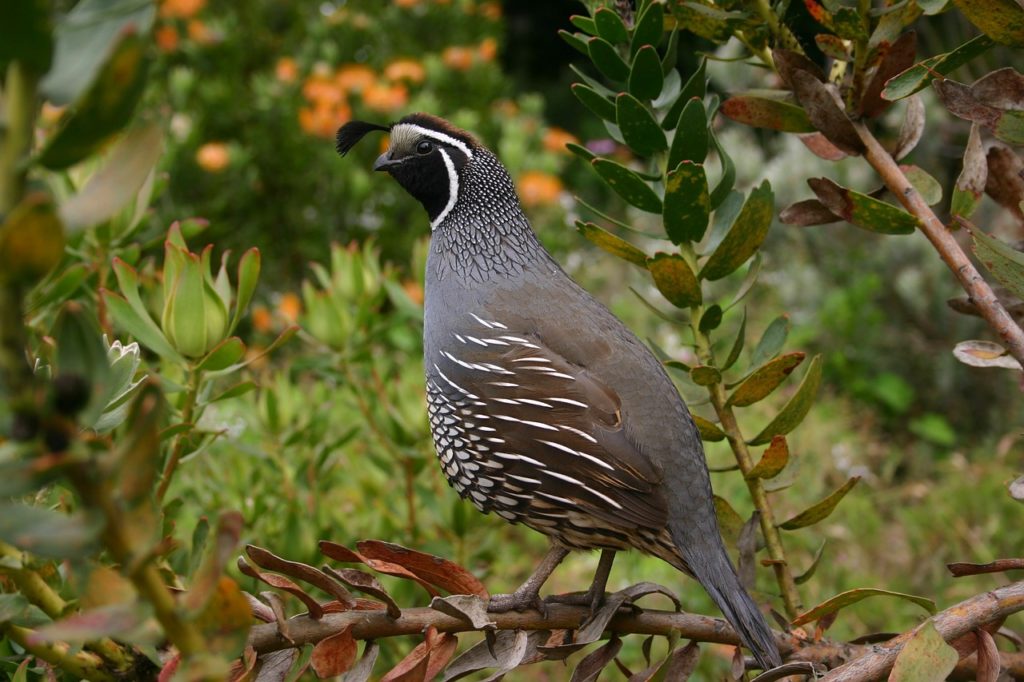 The Gambel Quail Callipepla gambelii is one of the symbols of the old west - they go hand in hand with tumbleweeds! Gambel Quail have the characteristic black comma-like plume on their heads and blue and chestnut colorations. The call of the Gambel Quail is a common sound effect in Western Movies.

The males are more flashy in coloration, but the females also have the comma-like plume. They are just a bit more understated in their coloring. Gambel Quail and California Quail are quite similar and hard to distinguish at a distance.

Gambel Quail are one of the six North American species of quail, all of which are plump little ground-dwelling birds that despite generations of breeding in captivity are still not quite fully domesticated.

Gambel Quail form large coveys or flocks in Autumn and stay as a group all winter. They tend to run to brush if startled and are amazingly quick runners. They tend to forage at dusk and dawn and rest during the midday heat.

Range: Gambel Quail have a small native range of the American Southwest. They can be found in southern California, Arizona, New Mexico, Utah, and Colorado as well as in northwestern Mexico.

Status in the wild: The IUCN currently classifies Gambel Quail as abundant enough in the wild to be of Least Concern.

Status in Aviculture: Gambel Quail are common and well-loved in aviculture. They are adaptable and tame easily.

Breeding and Incubation: Breeding season for the Gambel Quail begins as pairs separate from winter coveys in spring. Breeding can occur in the first year. Nests are made on the ground, in cover, by the female. Typical clutch size is 9-14 eggs. Incubation takes 21-24 days. Young are cared for by both parents, and grow quickly. When moving about, the family tends to form a line with the male at the lead and the female at the rear. First flight is at ten days old. In years with adequate moisture, the pair can often have a second brood. When incubating chicks, be sure that the floor surface is not slippery, as slick surfaces can cause leg and foot developmental issues.

Lifespan: The average lifespan of quail in the wild is 1.5 years. In captivity, Gambel Quail can live over five years.

Housing Requirements: Gambel Quail are quite winter hardy when kept in a group or covey. But avoid overcrowded as pecking can be issue. Quail, in general, do not do well in wet environments, and Gambel Quail are no exception. Be sure the aviary is well-drained or has a wire bottom. Protection from predators is important, as well as room and cover to escape to if startled or stressed. Roosting spots should also be provided as well.

Miscellaneous Notes: Gambel Quail are named after nineteenth-century naturalist, William Gambel, who explored much of the American Southwest.