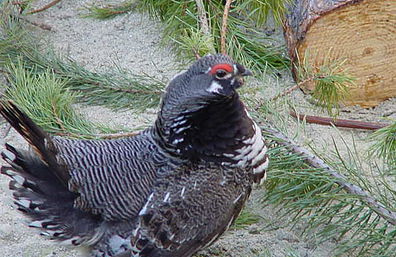 Although Canada Spruce Grouse are not common in aviculture, they are a highly popular species among aviculturists. Some people believe they are difficult to raise, but that is not true if fed and taken care of properly.

Range: You can find Canada Spruce Grouse throughout much of Canada, as well as northern parts of the United States.

Status: The Canada Spruce Grouse are stable in the wild. Along some areas of the southern edge of the range, they are considered "endangered" or "threatened." They are not common in aviculture.

Breeding: Male grouse are polygamous while the females are monogamous. Nesting season is from May to July. Females breed only once a year and usually lay 4-7 eggs in ground nests. The incubation time for eggs is about 24 days.

Housing Requirements: Grouse do best in cooler, higher elevation environments. Outside of breeding season, grouse should be kept in separate pens to prevent chasing-induced stress. We recommend a pen size of 4’ x 6’ x 6’ per bird.

Diet: In the wild, the Canada Spruce Grouse mostly eat pine, larch, and spruce needles, adding fruits, fungi, shrubs, and insects to their diet in the summer. Cilantro, dandelions, and clover make excellent treats. When available, they should be given leaves from blueberry plants and cut up cranberries to control bacteria. Add maintenance pellets for extra protein. Feed bowls should be cleaned regularly to prevent illness.

Miscellaneous: Main predators are hawks, owls, foxes, pine martens, and coyotes. The Canada Spruce grouse is sometimes called "fool hens" because they allow predators to get close before flying away. They prefer walking on the ground or tree limbs over flying.