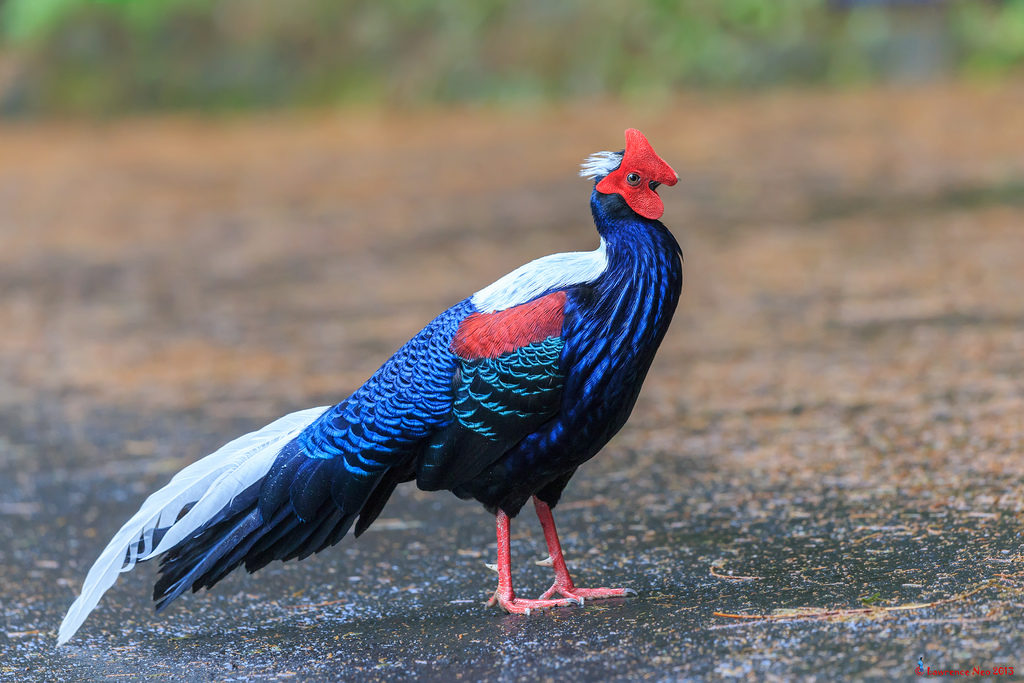 Although native to the forest-jungles of Taiwan, Swinhoe's Pheasants are easily tamed and do well in captivity.

Swinhoe's Pheasants are large, brilliantly colored birds. Males have bright red facial skin, wattles, and legs. Their feathers, from the neck and over the chest and sides, are mostly shades of midnight blue with lacing patterns of royal and teal blue colors. They also have a white crest and a white patch on their upper back. Their magnificence is amplified by a purplish-red strip of coloring over the shoulders. Their tails are about half the length as the body. It is full and highlighted by a pair of pure white feathers that stand out brilliantly against a stock of dark blue-black curving tail feathers. The female is smaller and much less attention-demanding than the male, but is a fine looking bird. Females have a smaller red patch around the eyes and matching bright red legs. Plumage is gray and brownish gold but with an intricate pattern of barring and lacing. Tail feathers are also brown with cinnamon and reddish tones.

Range: The Swinhoe's Pheasants endemic are to the mountain forests of central Taiwan.

Habitat: In their natural environment, these birds are found mostly in the dappled shade mountain forests of tall hardwood trees, usually at high elevations of 1,000 to 7,000 feet. The Swinhoe's Pheasant seems to prefer primary broadleaf forests but with logging pressures in its native environment, it has been successfully adapting to mature secondary moist hardwood forests.

Status in the Wild: The Swinhoe's Pheasant is currently listed under Near Threatened (NT) status, as it is probably going to become endangered at some point in the near future, mostly due to land development and logging in Taiwan. The natural range of this species is only on the small island of Taiwan and between development and the range limitations, this species is comprised of a very small native population. In the 1960's and 1970's these were popular hunting birds, and some population centers were completely decimated. There are now secure native populations in protected forests in Taiwan, such as Yushan National Park, and there are also many populations now worldwide of these beautiful pheasants, making the global population estimated at about 10,000 individuals (approximately 6,500 in being in the Yushan National Park).

Status in Aviculture: These are well established and quite common in aviculture, being very hardy and adaptable to a variety of climates. Swinhoe's Pheasants are a good 'beginner pheasant.' They are calm and uncomplicated.

Breeding: Male gives a courtship and mating performance - with flaunting and displaying as well as wing-whirring, bobbing, and raising of the white crest as well as the red wattles on the face. Breeding is usually March through April, but can extend into July. Although Swinhoe's Pheasants can be fertile in the first year, it is best to wait until the second year when the birds are fully mature before breeding.

Incubation: Nests are usually on the ground sheltered against a tree trunk or large rock, although sometimes higher locations are chosen. March through May, the hen will lay usually around 3-7 creamy-reddish eggs with 1 egg being laid every other day. Incubation lasts 24-27 days and eggs are sat on by the females. Chicks start to leave the nest after 2 or 3 days and are camouflaged in soft brown colors. Young birds get their adult plumage at 2 years of age.

Lifespan: Although lifespan in the wild for most pheasants is under 2 years old, in captivity and with good husbandry, the Swinhoe's Pheasant can live between 10 and 15 years and perhaps older.

Housing Requirements: At least 150 square feet of aviary space per bird is required. Although Swinhoe's Pheasants in the wild are solitary most of the time, they can be kept successfully in pairs or trios if hens are accepting of one another. Males should not be kept together or with other male pheasant species. Swinhoe's Pheasants roost in trees at night time so these birds will need raised areas for roosting. For laying and/or nesting, they will need private and sheltered spots within the aviary, which mimic the shelter of tree trunks or large rocks. They are hardy and can withstand cold temperatures. They do enjoy dusting; they should be provided with some area with sand or dry soil so the birds can dust and keep their plumage glowing. Make sure their enclosure is safe from predators including very small ones such as mink and weasels.

Diet: The diet in the wild is varied, comprised of both plant material (nuts, berries, buds and leaf shoots) as well as insects and worms. Swinhoe's Pheasants forage during the day, mostly in morning and late afternoon on the ground. They tend to dig and scratch about. They need a medium level protein diet of 20-23% protein. Higher-protein 'breeder poultry pellets' with 23-26% protein (may have to be crumbled if pellets are too large) combined with greens and other variations when possible would be quite adequate.

Miscellaneous Notes: The Swinhoe's pheasant got its name in 1862 from its discoverer, Robert Swinhoe, a British ornithologist and naturalist. It is also known as the Formosan Pheasant (Formosa being the Portuguese name for the island of Taiwan). Taiwanese people have called them blue pheasants, mountain chickens, and red-footed mountain chickens.